Peter Francis was originally part of John Francis, a mixed discipline firm founded in the late 19th century. It was subsequently sold in 1989 to a large British Institution (the Halifax Building Society). Within 3 years of this sale the auction business was acquired back by a partnership led by Captain Peter Francis, a third-generation member of the founding family. This firm was incorporated in 2007 and continued to trade as Peter Francis Auctioneers Ltd. 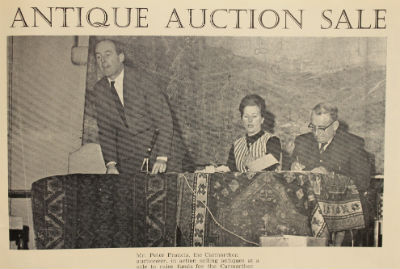 Captain Peter Francis on the rostrum at the old Carmarthen Drill Hall in 1965. He is assisted by Pauline Oliver, who became a partner in the firm (now retired) and Mr Williams the long term cashier.

Antique Sales were held in the Curiosity Salerooms in King Street Carmarthen from the early 1970s, with General Sales taking place in various village halls over the years and most recently in Pensarn. 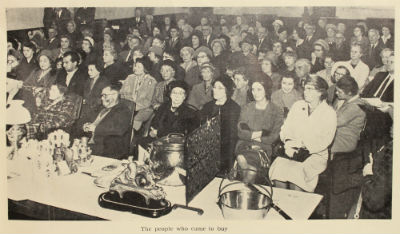 The sales are as popular as ever - but these days the internet plays a slightly stronger hand and there are fewer ladies in fur coats and hats.

In 2009 the business relocated to the Towyside Salerooms in Old Station Road. These premises extend to over 8000 square feet on the ground floor and have been converted into a modern saleroom facility incorporating offices, a large sales floor, storage, cataloguing and processing areas. There are also some 6,000 square feet of first floor offices, presently available for rental, together with two training or conference rooms. All sales, valuation days and office facilities are now available at the venue of Peter Francis Auctioneers.

For many years, the firm had a satellite office in Cardiff with Steven Hill, who ably represented us in that part of Wales. We now have designated regional valuers who are all based in Carmarthen but cover, individually, Pembrokeshire, Ceredigion, Powys, Carmarthenshire, Cardiff, The Valleys and Swansea. See our Staff page to find contact details for the valuer who covers your area.